It’s the weirdest thing today. I’m actually super excited and feeling confident about the South Beach Triathlon this weekend! Now most of you are like “what’s the big deal? you like to race. Why wouldn’t you be excited”. While those that know me and my past with this race are like “Did you fall down and hit your head. Somebody call an ambulance!!”.

My SoBe “journey” started in 2013 when it was Nautica South Beach Triathlon. Ahhhh…high hopes. I had successfully completed all of like 2 Sprint Triathlons. Quite a few people were heading up to South Beach and I got swept up in the excitement. Traveling for a race! With my friends! It’s gonna be so fun!! (spoiler alert: It wasn’t). The seas were angry that day my friend (as they would be for every single year I’ve done it). I quickly figured out that my swim skills were lacking. Wasn’t afraid, just wasn’t very good at it (so cute how I use the past tense there. sigh.) I made it through the swim and hopped on my bike. 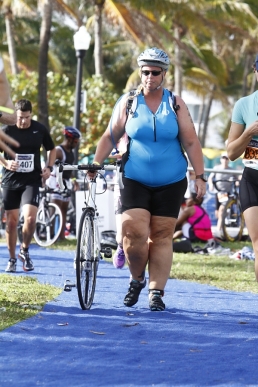 Notice the people behind me….heading out on the run while I head out on the bike. The look on my face says it all.

Was feeling good(ish), even passed some people!! Wellllllll…..I headed up that M-Fer of a bridge and was pedaling, pedaling, ped-a-ling, ped OUCH MY BACK! figured I walk the last 20 yards and shake it out so I tried to unclip and FAILED. Tipped right over. Sure did. Hit my head, handlebars messed up, chain off. It was a mess. By the time humpty dumpty got itself together again, one of the king’s men informed me, ever so helpfully, that I was going to miss the cutoff for the bike and encouraged me to pack it in. DNF.

Then came SoBe 2014 and what was to be my crowning moment of glory!! I trained hard. I paid special attention to the bike training so I could conquer those damn bridges. I was ready! and I did it!! It wasn’t pretty, but I crossed that finish line severely dehydrated, overheated, perhaps minutes away from sunstroke, but PSYCHED! 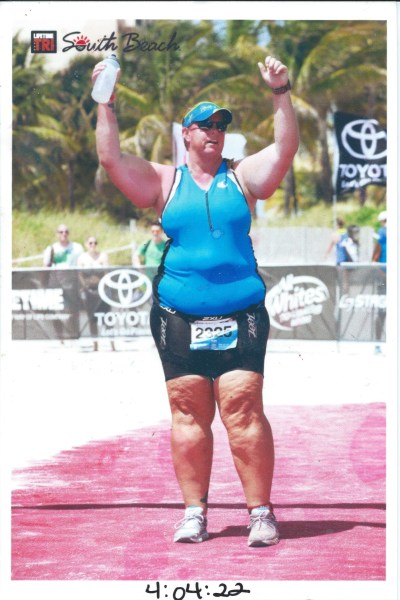 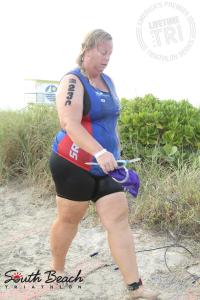 me no feel so well

Then there was last year. SoBe 2015. I was ready. I was prepared. I was up all night the night before with food poisoning. I was up there alone as the super tough conditions had most people I know skipping it. As I should have. I decided to just grab a SUB to go from the place right across the WAY from the hotel I was at. The place looked super sketchy but I did it anyway and paid the price. I made it through the swim and then added an extra transition when I went to the medical tent right after. Tried to mount my bike and decided to bag the whole thing when I couldn’t really see the bike I was trying to get on. DNF

So here we are for South Beach Triathlon (as it’s called now) 2016. It’s 5 days away and I ain’t scared! I’m excited! I’m pumped! I may be slightly delusional. But that’s the beauty of this sport. You can always fool yourself into thinking things will be better. and I really believe it will be. I’m MUCH better prepared and have done enough of these to know that I can always gut it out. Unless of course my guts are actually out.

A few months ago I did a scary thing. And it kind of reminds me of triathlon. It was a gorge swing. You get all strapped up and then step off a platform into the abyss 400 some odd feet below fairly confident you won’t actually die. As you start it you’re “WTF am I doing???? I am so scared”  You reach the bottom and you’re like “NEVER EVER AGAIN”. By the time you get to the top, you’re like “Hell yeah! I can’t wait to do this again!”

Enjoy the excuse for me to post this video yet again (sorry). SoBe or Bust!!!